putting words to work for you

The waging of war is incompatible with following Jesus.

From “Brian Zahnd: Postcards from Babylon”

Worth a Read (and a Second Read) …

Extracts from a Thomas Merton essay,

“We Have to Make Ourselves Heard,”

first published in the June 1962 issue

of The Catholic Worker

It would be legitimate and even obligatory for all sane and conscientious people everywhere in the world to lay down their weapons and their tools and starve and be shot rather than cooperate in the war effort. If such a mass movement should spontaneously arise in parts of the world, in Russia and America, in China and in France, in Africa and in Germany, the human race could be saved from extinction….
END_OF_DOCUMENT_TOKEN_TO_BE_REPLACED

George Kudrick didn’t go to war in WWII’s Pacific Theater to fight or kill anyone.

He didn’t go to represent the United States or its flag.

END_OF_DOCUMENT_TOKEN_TO_BE_REPLACED

Blessed are the peacemakers, for they will be called children of God.

From the Book of Matthew,

You have heard that it was said, “You shall love your neighbor and hate your enemy.” But I say to you, Love your enemies and pray for those who persecute you.

From the Book of Matthew,

Every gun that is made, every warship launched, every rocket fired signifies, in the final sense, a theft from those who hunger and are not fed, those who are cold and are not clothed.

From “The Chance for Peace” Speech,

A true revolution of values will lay hand on the world order and say of war, “This way of settling differences is not just.” … A nation that continues year after year to spend more money on military defense than on programs of social uplift is approaching spiritual death.

From the “Beyond Vietnam” Speech, 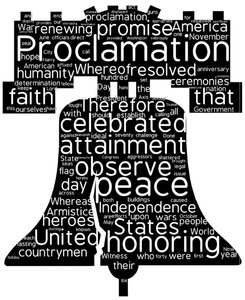 Why doesn’t the US observe Armistice Day?

Theme by Anders Noren — Up ↑